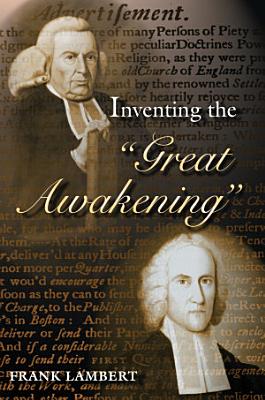 This book is a history of an astounding transatlantic phenomenon, a popular evangelical revival known in America as the first Great Awakening (1735-1745). Beginning in the mid-1730s, supporters and opponents of the revival commented on the extraordinary nature of what one observer called the "great ado," with its extemporaneous outdoor preaching, newspaper publicity, and rallies of up to 20,000 participants. Frank Lambert, biographer of Great Awakening leader George Whitefield, offers an overview of this important episode and proposes a new explanation of its origins. The Great Awakening, however dramatic, was nevertheless unnamed until after its occurrence, and its leaders created no doctrine nor organizational structure that would result in a historical record. That lack of documentation has allowed recent scholars to suggest that the movement was "invented" by nineteenth-century historians. Some specialists even think that it was wholly constructed by succeeding generations, who retroactively linked sporadic happenings to fabricate an alleged historic development. Challenging these interpretations, Lambert nevertheless demonstrates that the Great Awakening was invented--not by historians but by eighteenth-century evangelicals who were skillful and enthusiastic religious promoters. Reporting a dramatic meeting in one location in order to encourage gatherings in other places, these men used commercial strategies and newly popular print media to build a revival--one that they also believed to be an "extraordinary work of God." They saw a special meaning in contemporary events, looking for a transatlantic pattern of revival and finding a motive for spiritual rebirth in what they viewed as a moral decline in colonial America and abroad. By examining the texts that these preachers skillfully put together, Lambert shows how they told and retold their revival account to themselves, their followers, and their opponents. His inquiries depict revivals as cultural productions and yield fresh understandings of how believers "spread the word" with whatever technical and social methods seem the most effective.