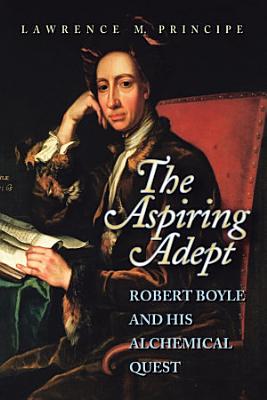 The Aspiring Adept presents a provocative new view of Robert Boyle (1627-1691), one of the leading figures of the Scientific Revolution, by revealing for the first time his avid and lifelong pursuit of alchemy. Boyle has traditionally been considered, along with Newton, a founder of modern science because of his mechanical philosophy and his experimentation with the air-pump and other early scientific apparatus. However, Lawrence Principe shows that his alchemical quest--hidden first by Boyle's own codes and secrecy, and later suppressed or ignored--positions him more accurately in the intellectual and cultural crossroads of the seventeenth century. Principe radically reinterprets Boyle's most famous work, The Sceptical Chymist, to show that it criticizes not alchemists, as has been thought, but "unphilosophical" pharmacists and textbook writers. He then shows Boyle's unambiguous enthusiasm for alchemy in his "lost" Dialogue on the Transmutation and Melioration of Metals, now reconstructed from scattered fragments and presented here in full for the first time. Intriguingly, Boyle believed that the goal of his quest, the Philosopher's Stone, could not only transmute base metals into gold, but could also attract angels. Alchemy could thus act both as a source of knowledge and as a defense against the growing tide of atheism that tormented him. In seeking to integrate the seemingly contradictory facets of Boyle's work, Principe also illuminates how alchemy and other "unscientific" pursuits had a far greater impact on early modern science than has previously been thought.

Authors: Lawrence Principe
Categories: Science
The Aspiring Adept presents a provocative new view of Robert Boyle (1627-1691), one of the leading figures of the Scientific Revolution, by revealing for the fi

The Invention of Science

Authors: David Wootton
Categories: Science
We live in a world made by science. How and when did this happen? This book tells the story of the extraordinary intellectual and cultural revolution that gave

Authors: Michael Hunter
Categories: History
Robert Boyle (1627-91) was the most influential British scientist of the late seventeenth century. His huge archive, which has been at the Royal Society since 1

The Idea of Authorship in Copyright

Authors: Lior Zemer
Categories: Philosophy
This book provides an interdisciplinary approach to copyright law, dealing with symbiotic relations between law, philosophy and the sociology of the human creat

Authors: Michael Hunter
Categories: History
The significance of Robert Boyle (1627-91) as the most influential English scientist in the generation before Newton is now generally acknowledged, but the comp

Authors: William Eaton
Categories: Science
The philosophy of Robert Boyle (1627-1691) is a hot topic in early modern philosophy. Boyle was at the centre of the scientific community of 17th-century Englan

Authors:
Categories: History
This book on medieval and early modern corpuscular matter theories presents the research results of nineteen scholars, who show that his modern model of matter

Authors: Pamela H. Smith
Categories: History
The fruits of knowledge—such as books, data, and ideas—tend to generate far more attention than the ways in which knowledge is produced and acquired. Correc

Authors: R. Crocker
Categories: Philosophy
This is the first modern biography to place Henry More’s (1614-1687) religious and philosophical preoccupations centre-stage, and to provide a coherent interp